EXPAND YOUR HORIZONSĀ With over 2.5 million copies sold, Civilization«, the greatest strategy game series of all time is about to go farther into uncharted gameplay. Welcome to Civilization«: Call to Powerü.Ā Build an empire to span history from primitive beginnings into the sci-fi future of 3000 A.D. Lead a turn-based conquest in which every strategy devised, technology discovered and war waged has repercussions on your future world. Answer the call. The power is in your hands.

Right thats the blurb over and done with, on with the review. 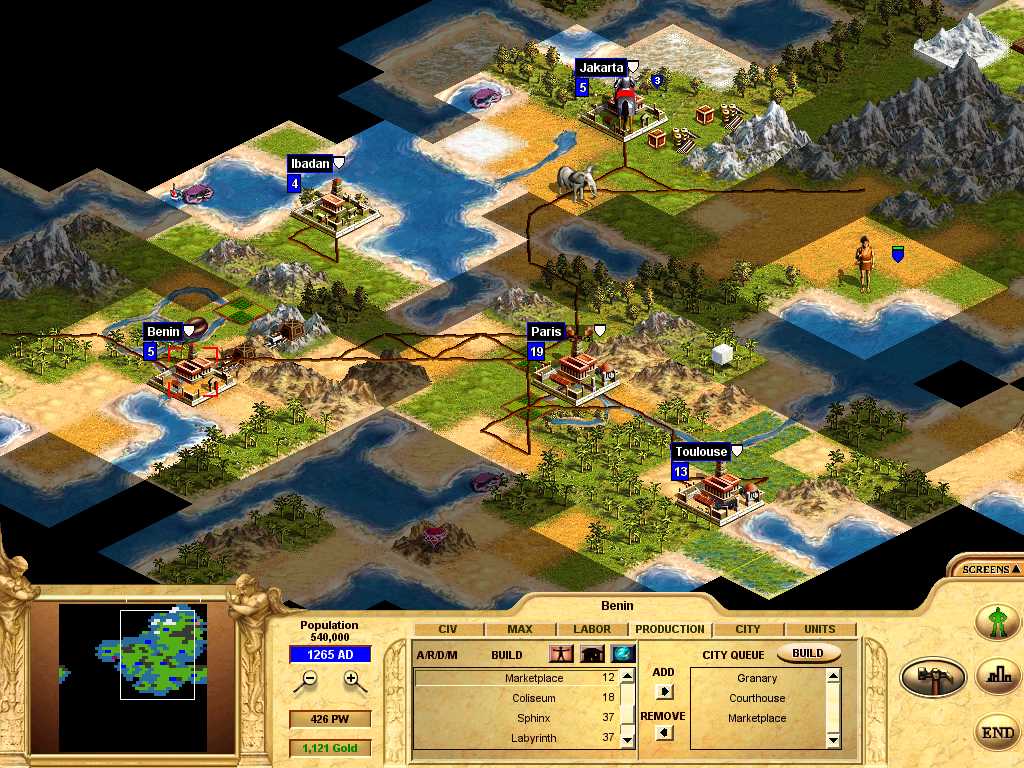 An early game as the French...

I received my copy only about a week ago and haven't looked back since the installation. The box and contents were lush compared to anything else i had ever bought and i delicately opened the box and CD ready for install.

The install process was fairly long and interesting it hung at the end of the install when i clicked on the restart button. A small search on the net and i became aware of the fault. I had to force restart and manually complete the install of QuickTime after. Despite that, which didn't overly concern me anyhow, i fired up the game.

When i was greeted by the main window i knew the crisp clean and colourful front end was only the start of what was going to undeniably be an enjoyable experience. The key to any game is the first reaction. If you get those Goosebumps as it starts that's a good sign. With me i was practically covered in em'.

I started a new game and just got straight into it. I believe you should pretty much be able to jump straight into any game, if you can't do that you are in for a rough ride. Being very familiar with the intricacies of civ2 gameplay it was easy... despite what other people have written elsewhere. 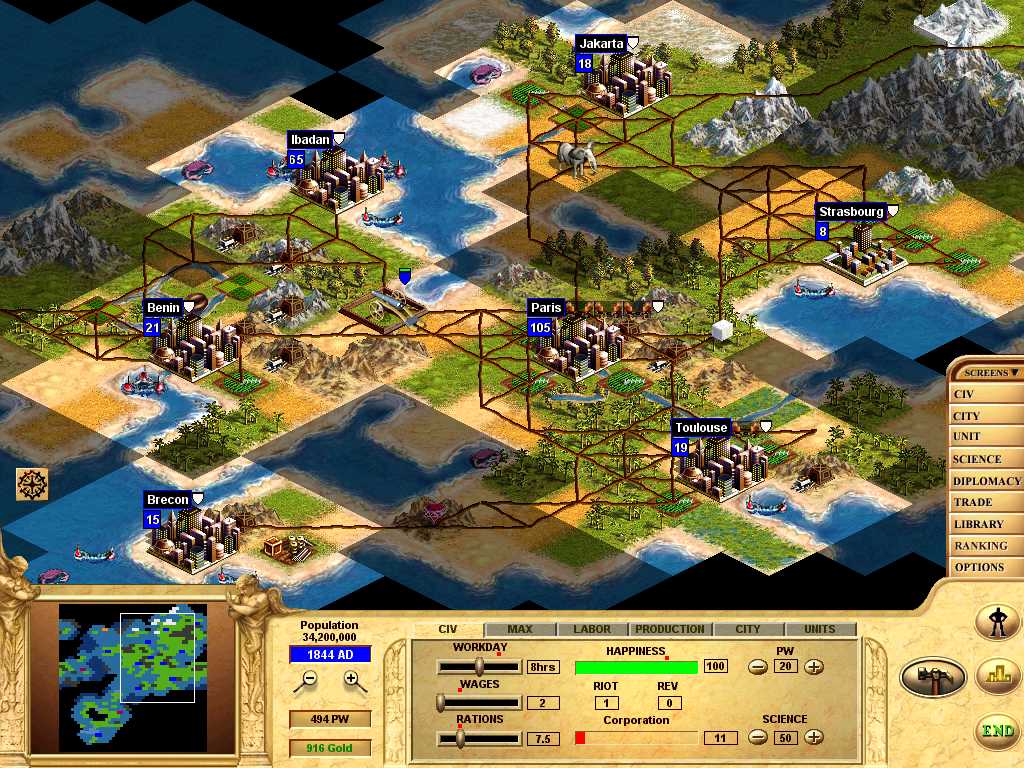 To start with the manual, and the complaints surrounding it, i believe were utterly unfounded. The few times i needed to glance at it i could find what i wanted very quickly. If you want anything better and more glossy then i recommend you buy the strategy manual but only very involved players i believe would ever have to go that far. The library feature on the game also is very useful as you play through.

My first game as the Mayans was a relative disaster :) I got converted by enemy clerics and invaded several times before i had figured out what to really do and how to play the game. However i was able to recover and start to practice with the more unconventional units, the Cleric, Diplomat, Slaver and Lawyer. I found some of their powers useful and in all cases excellently animated. The paper throwing act of the lawyer was good and the cleric conversion animation amazing.

I have played the SMAC demo and the animation here is far superior, and alot less grainy. What really impressed me... It'll be wrong to do but i have to compare it to the already redundant copy of Civ2 i have. The diplomacy is a dramatic improvement to what i have been used to in Civ 2. In Civ 2 if you even poked at an enemy unit everyone hated you and called you a backstabber, alliances were impossible thereafter and your game was largely ruined if you wanted to make peace.

In this i was truly stunned. Even the way the sentence is formed as you make demands or offer treaties is realsitic and makes for an all together better experience. Also i was impressed the way one of my long ships, prowling in Polynesian waters, was warned that i should avoid these waters for about 6 turns otherwise my reputation would be affected. I took heed, after smacking myself in the face, and moved on. That again just adds to the feeling of immersion i am rapidly getting from this game. 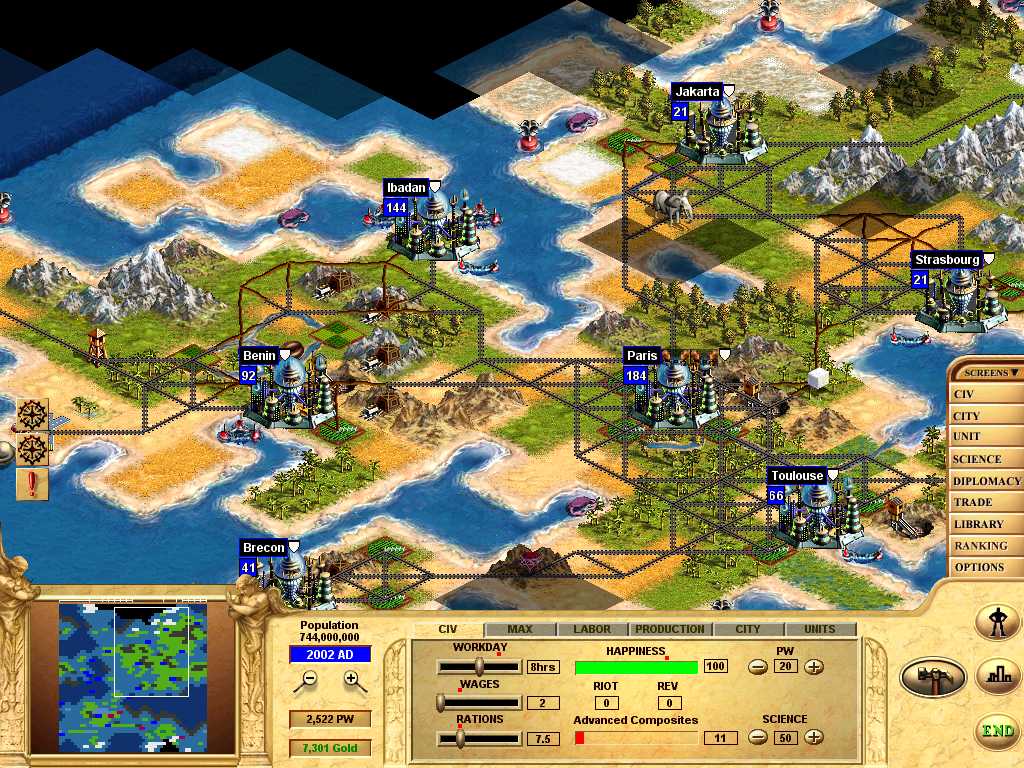 744 Million Frenchmen, what was i thinking!!!

The movement path of units too, although difficult to control initially, is now intuitive and informative... in the space of a few hours i had total control of my units as opposed to sending them all over the place. Knowing how many turns it will take for your legions to rush back to defend your cities is a major boost in planning and control of any war effort (especially as i was being invaded). The same applies for using the control interface. I enjoyed combat as a refreshing alternative to Civ2. It's nice to see battles between masses of units (usually my enemies!) and being a more true reflection of numerical supremacy. In Civ2 you typically had to attack with your stronger forces first (to wear em' down) and occupy the city with the defense units coming along. In this damage appears to be spread evenly between the survivors.

Also, i am very interested in history, deeply so as a matter of fact. This game has only flawed in that area but also made up for it too. The inclusion of Nicaraguans, Nigerians, Ethiopians, Polynesians, Jamaican's and Cuban's was a real let down. By doing this, with these relatively small civilisations, they have cut out many of the more impacting civs that have ever existed. Where are the Aztecs? Babylonians? Carthaginians? Arabs? These kind of omissions were really annoying and although correctable it means fiddling around with text files or patches. This was the only thing that truly irritated me... it probably is cosmetic to others.

It did redeem itself by timing the arrival of technologies within reasonable time frames. In Civ2 i have been nuked once at an amazingly early date. Again this is cosmetic but it matters to me. It was amazing how, in Civ2, it could be the year 2000, you'd have modern technology and be spread across the globe yet still only have some 3 or 4 million inhibitants. I think around the 24th century i had some 433 billion (!) inhibitants.

I am not saying this game has no faults (see news page), but i believe they are correctable and in my case rarely cro up to ruin the game (it may be worse for others). Once you are lucky to get stuck into a real good and long game its awesome. Lets hope the patch gets to us soon!

I cannot recommend this game enough. If you already own Civ 2 this will blow you away. If you don't just forget about civ 2 and go buy Call to Power!

[an error occurred while processing this directive]